On being a girl geek

Amanda Hocking has this remarkably insightful way of looking at things.

If you don’t know who Amanda Hocking is, you should. She’s sold more books in the last minute and a half than most bestsellers hope to sell in a month. Or a year. Or their entire careers. Or something crazy like that. She puts out eBooks and Print On Demand (POD) books – she is her own publisher. It’s a fascinating case study in “going viral” because first her books went viral, then she went viral as the media rushed to report on her as a story.

But who cares about that part of it (other than me, who aspires to her level of success) – she’s a writer and writes some nifty blog posts. This one about dude geeks vs. lady geeks resonated particularly well with me.

I’m a lady geek who knows that about myself, but I think there are a lot of women who wouldn’t classify their interests as geeky, but are just as funny/quirky/odd as the guys who paint miniature figurines or collect baseball cards or attend movies in full storm trooper gear.

Amanda says that the traditional “dude” geeky things are acceptable and the “lady” geeky things aren’t. I have a feeling this is an observation bias, and that she could benefit from a few showings of Twilight with my sister and her Twi-moms friends, where they can literally repeat every line of dialogue. Probably hum all the tunes, too. If pressed, I imagine interpretive dances would be possible. “You think you can out-dance me?”

But then, I don’t think she’s wrong when she says:

Why is that? She keys in on romance as the key difference. Do you think that’s it? 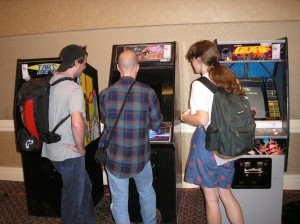 I think from my point of view, geeky interests are in general frowned upon, regardless of gender categorization. I have spent loads of my life trying to avoid sharing too much about my various geeky interests.

I remember vividly an intense conversation I had with a 7th grade boy from my class about the Ultima IV videogame (sidenote: Anyone know if the games are still out there in the public domain somewhere? I check the app store for the iPad port every once in a while…loved that series…) that we both played. Until that moment, that conversation, I hadn’t realized that *anyone* I knew played the same videogame and knew anything about it. It was certainly not possible that any other girl I knew would have played the game (even though I got into the series because my older sister played the first one or two.) Girls other than me didn’t play video games (this is 7th grade, remember. I had no idea.)

So I geeked out with the guy for a bit, until it dawned on me that I was talking with intensity about a videogame with another person. A boy, no less. I remember the strong urge to change the subject/move elsewhere/do something else because I was exposing my extreme geekiness just by talking to him. (For the record, it was clear from our conversation that I was the far superior player, natch. This further added to my sudden bout of self-consciousness.)

Somewhere in adulthood, this all changed. Is it parenthood, which so clearly obliterates ones feelings of self-consciousness about so many things as we become aggressive information seekers, sharers, and worriers? Or just that whole “maturity” thing, which I’m not sure I’ve achieved yet but I’ve read about it in books. Oh gosh I am such a book geek! I can’t help myself – when I see people reading a book I like, I have to ask them about it. My only complaint about ebook readers is that I can’t tell at a glance what someone is reading. Unless I peer over their shoulder. That seems a touch weird, right?

There are still aspects of my geekiness that I do try to obscure, or at least not inundate others with. And I do apologize profusely when I’ve drenched someone with one of my geeky interest areas, like I did the other day with breastfeeding and a young woman who isn’t a mom but would like to be one day. But more and more I’m accepting and embracing my geekiness and figuring that people who find it less acceptable, well, they probably just have a “oh she’s such a geek” column in their head that they file more examples under. Who am I kidding? Nobody else has the mental filing system metaphor. I’m such a geek!

So I shared some of mine. How are you geeky, and how do you accept the geeky parts of yourself?