Joining a blog train courtesy of Melissa Duclos, one of my many and numerous online writing friends, who in this day and age are as real as any of my in-person writing friends.

The blog train’s purpose is to get writers (and publications in some cases!) talking about what we’re working on and our process for writing (or publishing.)

So without further ado, let me let you in a little bit on my process and what’s on deck for me in what I hope is going to be a very productive summer.

What am I working on?
I write science fiction and fantasy for middle grade and young adult readers, but I have also been working on my freelance portfolio lately. I’ve got a new piece up at BookTrib.com about how to not be a junk food vegetarian, and will likely have a few more articles in the coming months. I plan to pitch something to a few big publications, more on that after I succeed.

But in fiction, my main goals for the summer are to just *finish* several things that have been in-process for far too long. First up is my Middle Grade scifi adventure story ADRIFT, about what happens when a young teen and her two siblings find themselves alone on the family spaceship when pirates attack. Next will be the book I’ve been working on for an age that really needs a sequel, but first I need to release this one as it’s been too long. It’s called A STAR TO LEAD ME and of all the things I’ve written lately, it’s the one I’m most excited by. It’s a scifi novel for Middle Grade readers set on a colony ship where all people age 13 and above suddenly fall into a coma-like sleep, unable to be roused. The main character (a spunky 12 year old whose birthday is in a few days) has to figure out how to control the ship and the kids aboard lest the spaceship meet certain doom.

So you know, your average everyday space-faring fun and games. 😀

How does my work/writing differ from others in the genre?
I’d say the biggest thing I’m doing that’s different from other writers is using space as a setting for middle grade books without making them silly aliens-ate-my-homework kinds of things. Not that there’s anything wrong with aliens eating my homework, just that it’s not the only thing I like about science fiction. Honestly, my favorite books when I was a teen reader were Heinlein and Asimov space adventure tales. I am writing to fill a void I see in the genre/age range, as the dystopian trend has taken hold in YA and regular science fiction set in space in middle grade books is somewhat unusual.

Why do I write what I do?
Ah, I touched on this in the previous answer, but mainly I write these kinds of books because they’re the kinds of books I want to read. I go into more details here.

How does my writing process work?
I am a burst writer. I’ve finally come to terms with that, even though it’s taken years. Most writing advice you hear talks about setting a daily habit. I love daily habits, it’s the only way I know where my keys are because I have a daily habit of storing them in the “key place” as soon as I walk in the door each day. But daily habits for writing work for me only in bursts, not ongoing. I kick myself about the lack of a daily habit at times like this. But here in the clutches of the last days of school for my 2 school-aged children it’s surprising that I’m together enough to be wearing pants most days. The number of performances, concerts, end of year parties, recognition banquets, awards ceremonies, and other general hullabaloo is astonishing. A daily writing habit isn’t practical nor is it an achievable goal for me at this time. Instead I’m focusing my energy on the upcoming summer with a looser-than-usual schedule and many goals.

In my burst phases, my writing process is generally to get my word count in as early in the day as possible, which is usually at or before noon. I’m not an early riser by any stretch of the imagination. I type blazingly fast, so I can usually knock out 2000 words in an hour or so, as long as I know what the story I’m writing is about. It’s another thing I kick myself about, as I should be able to produce so much more than I do because I type so fast. I have a family, though, and that’s first in every list I make, so I try to put that self-pressure aside. There will be time aplenty to write uninterrupted when the kids leave for college, which will be shockingly soon.

Now, on to my friends, who I am very interested to hear from about their works in progress and writing  methods. 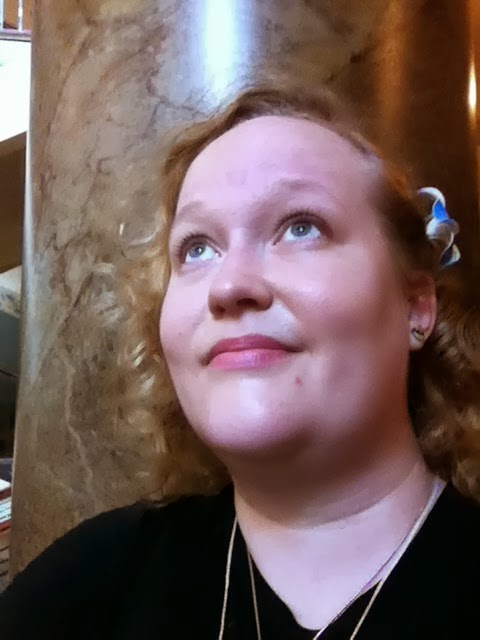 First up is the lovely and talented Nina Niskanen, who  is a software engineer, writer and blogger from the beautiful Helsinki, Finland. She is way too excitable about science, space exploration, Disney, and mythology. Consequently she likes to write science fiction and fantasy in which women do awesome things, often in space or Finland. Nina’s online evil lair of glitter is at ninaniskanen.com

Next is Trina Marie Phillips, who I know from the shared writing blog The Prosers that we both contribute to.

And last is TBD – I’m waiting to hear from a few folks I’ve asked to tag but didn’t want to ambush with a blog train request!